Back to the drawing board… 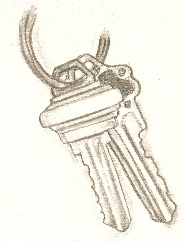 (Panic: The Beginning)   I woke up this morning to get my daughter off school.  We did our normal routine she got ready, I threw on clothes,  put on coffee and drove her to the bus stop.  After the bus pick her up  I came home and made  a hot cup of coffee and settled down to my desk to check my emails.  I noticed that Sam (the dog) was no where to be found and I thought I may have left him outside.  At this time it’s still early and I didn’t want Sam to bark and wake up the neighbors so I went outside to get him.  I looked around and he wasn’t in the back yard so I thought maybe he was still in the house and I just didn’t see him.    I went to the sliding glass doors he was staring at me.  So problem solved.  I went to slide the door open and it was locked.  Crap.  I can see the through the sliding door to the front door and it was locked.  Crap.  So here I am standing outside in the wet cold grass wearing a ratty worn crazy looking jogging suit, unshowered, hair not combed, teeth not brushed,  barefoot , David’s out of town and  I’m locked out of the freakin’ house.  Craaaaaaap!

(Panic: Part Two)    I thought Karen! she hasn’t left for work and she has a spare.  I walked to  her house.   She doesn’t live that far away but cars were passing by and slowing down to stare at me in confusion making me  fully aware that I  looked like a barefoot lunatic who just escaped the ward.   By the time I got to her house my toes were numb, my jogging pants were wet and I was embarrassed.   She told me that  may have the key, but guess what?  She left it at work if she has it at all!   Craaaaaaap!

(Panic:  Part Three)   I thought Alana! she has a key!   I got in touch with her  and she had a key in her book bag!!! Sweet relief.  I couldn’t go into the school, so I borrowed Rob’s car and followed Karen to the school.  And she went in and got the key for me.  By this time I am gitty with relief and drove home to unlock that @#$* door.  And I did…. except the lock at the top of the door was in place and the door would only open  six inches.  Craaaaaaap!

( Panic: The Final Chapter)  I sat on the front step trying to figure out which would make David less mad… Is it better to break a window or axe the lock on the back door… Keep in mind even I called a locksmith something was going to be busted up… So I figured I would do the busting for free.

Then I remembered that I opened the window in my bedroom when the weather was warm.  EUREKA!!!!!   And I noticed that David left the ladder outside,  (This is when I heard the angels singing)  I went to the bedroom window and was able to finally get into the house.  Here I thought Friday the 13th was last Friday but I may be wrong!  This experience has taught me five lessons: 1.  Don’t get locked out of the house.  2. If I would have stayed calm I would have remembered the window and saved Karen and Alana a lot of trouble. 3. Come up with a plan B in case I get locked out again.  4. I am completely safe in that house when David’s away. 5.  Lock my bedroom window for lesson 4.

Drawing these keys was the obvious choice for the weekly challenge.  And I am going to put my head in the sand until tomorrow.

9 thoughts on “I wish I was an Ostrich…”